I know it’s been a while since I have posted on wine, but no worries, after this trip to the Daintree we will move on to Adelaide and the surrounding wine regions. Exciting! I just thought it was worth posting these nice pictures from the rainforest. In addition, there are some foody delights from the jungle that deserve a mention. How does lunch in the middle of the jungle sound? Or rainforest ice cream? For entering the Daintree, we used a small tour company called Discovery Tours Australia. We left from Cairns in the morning, and returned the same evening. END_OF_DOCUMENT_TOKEN_TO_BE_REPLACED

The time this post publishes, the tropical scenery featured in the pictures is a faint memory. I have timed it to go around the same time as we land in freezing Sweden.

Lumpini park is one of the must-visit places in Bangkok. Its kind of an oriental (smaller) version of central park. A perfect place to relax in the middle of a buzzing city. This time we didn’t have any wine with us, but I could imagine myself having a nice sunset picnic with a  chilled bottle of white Burgundy. I tried to find out if it is allowed to drink at public places. Looking at all the tourists going around with a beer in the hand, I would assume so. You can never know though, so perhaps good to bring along a brown paper bag (haha). This post will unfortunately not feature more wine (I promise the next one will), but a few pics from life in the park. 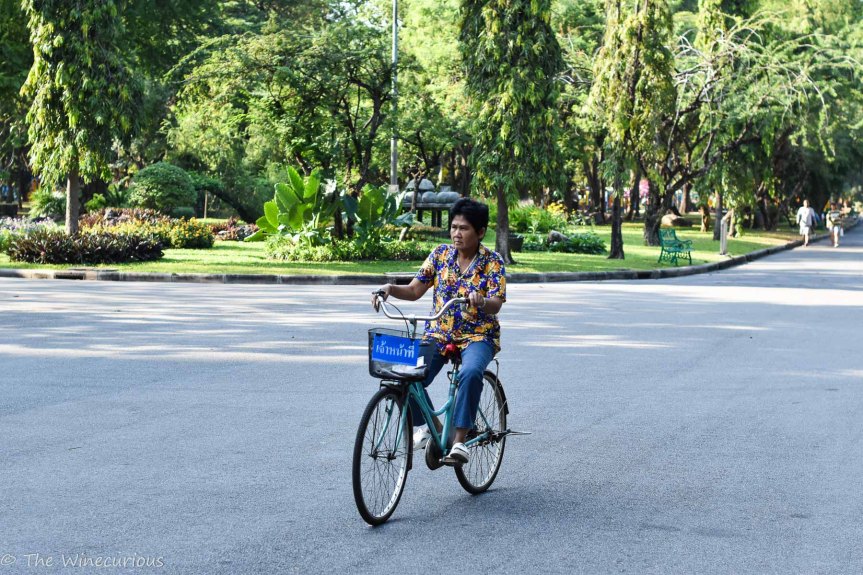 Last week, myself and M attended a beer brewing course arranged by our friends at Yelp Sweden. I am always intrigued about the making of things, a supply chain specialist as I am, so we were quite excited about the event. The course was arranged at a small brewery and pub, Cafe Proviant in Stockholms Kungsholmen. It is difficult to write about beer brewing in a short way, so this will more be a description of our day on the course instead of a manual on how to make beer (for that you need to attend Cafe Proviants course).

I was not sure what to expect from the course. Would we be brewing ourselves or would it be more like a lecture? It was closer to the latter, as we sat around a big table following closely as the brew-master, Roger, guided us through every step. He started with introduction of the art of brewing and the ingredients. Glasses of sample ingredients were circulated around the table followed by the mixing of malted barley with the 68 degree (C) hot water. The first tasters of Cafe Proviant Ale were served as Roger shoveled the ingredients into the boiling pot. 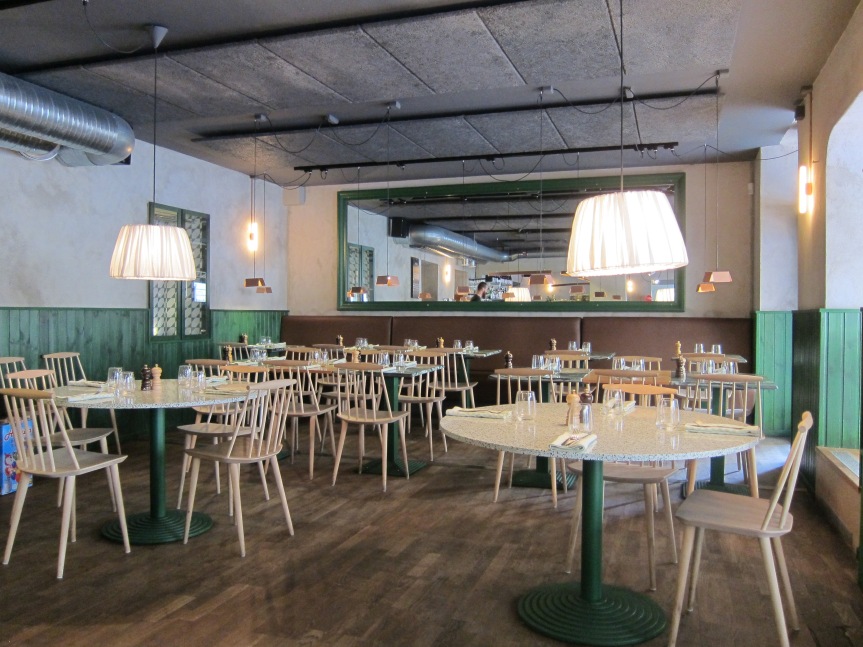 After the first steps we had some waiting time (approximately 90 minutes). The staff kept us entertained with some more sampling of beer and tasters from their menu. We had cheeses with some sea buckthorn chutney, a soft pretzel with ramson butter and grilled green asparagus with a few different sauces. All wonderful dishes alongside beer. Especially the ramson butter has stayed with me as one of the days favorites. Time just flew by as Roger told stories of beer brewing while waiting and circulating the beer in the pot. More beer was served as tasters: Pistonhead cascade lager, Poppel American Pale Ale, Södra Maltfabrikens IPA, Paulander Hefe-Weissbier and Saison 1858 Brasserie du Bocq. A wonderful range of Cafe Proviant favorites. My favorite, or perhaps the biggest positive surprise was the fresh Saison. Perhaps I will not down a bottle of it (as the bottle is a 0.75l), but it is a wonderful option to have on the table instead of wine on a hot summer day.

After some more cooking more ingredients, the hops are added to the mix. As the heat builds up there is a wonderful aroma of rye bread taking over the room. It reminds me of the Finnish sauna when mixing some beer with the water (old Finnish tradition). We waited, tasted some more beer until the cooking reached a 100C. Meanwhile Roger kept the stew circulating and guarded that no ingredients were clumping up.

Beer brewing is a time consuming exercise, so we did not have time to finish all the initial steps before we ran out of time. I can see M eyeing the equipment and sizing it whether it would fit into our apartment. If we would have a bigger home I would also be delighted to have one. However, right now, we both figure that it is better to buy our beer instead of making it. In around four weeks time we can return to Cafe Proviant and try out the beer “we made”. A fun two hours with interesting information, great people and a reason to come back again. For all you beer enthusiasts out there, Cafe Proviant is definitely a place to visit.

Like weddings? And other big events? Me too! However, I seldom find the wines served very interesting. It is not easy arranging quality drinks for a hundred people without it being heavy on the wallet. A few weeks back, we attended a wedding in Finland that was a pleasant exception. I kind of knew it would be as the couple are as winecurious as me (and the groom revealed what would be served as aperitif even before the date was set). Actually, their big day did not only have a serving of good wine, the whole event was organized to reflect the couples interest in the topic. I really loved these details and thought it would be nice to share them with you (with the couples consent of course). So here are a few tips on how to “wine-up” you event.

1. Accessories: The theme was reflected already at the church as small bottles of bubbles were handed out to greet the newlyweds exciting the building. The small champagne bottle soap bubbles were elegant and cute and I was able to snatch one home. The space also had some nice wine-details, like the place-card holders and wine bottles candlesticks.

The couple exciting the church were greeted with bubbles

2. Games: The couple was intent on serving good and interesting wine on their big day, but that kind of bottles come with a price. However, they have a very nice wine cellar that they decided to utilize for the occasion. As there were no wines in the cellar reaching the number of bottles required to serve everyone, they picked different bottles and held a wine-quiz. The winning group (of around 6 people) could go to the table and pick a bottle first, the second could go second and so on. The quiz was more about the couples wine-adventures than actual wine-knowledge, so one didn’t need to be an oenologist to win (luckily we had one in our group though as it came handy in some of the questions regarding the couples cellar). A wonderful and fun game with a prize I really wanted to win. We picked a great 2003 shiraz from Kay Brothers. It was a real treat with the lamb main course.

3. Beverages. For beverages, the couple invested in a great aperitif (and of course the wine game). They had bought magnum bottles of Palmer & Co Vintage (2002) Champagne. A magnum is often a better buy than a regular 0,75l bottle and for a big event, it makes sense to open some. Other wines had been selected by arranging wine-tasting among friends before the big day and by ordering larger quantities online. Finland is an expensive country when it comes to alcohol, so utilizing the free movement of goods within the EU, many nice wines are found cheaper in eg Germany and France. One must be aware of the customs rules though, so read up before you make your order. A good tip is also to take a cruise on the boats between Finland and Sweden. Many nicer wines can be found on the boat tax free. Bring friends though, as the maximum amount of alcohol that one can bring to land is 4l (5 bottles each). 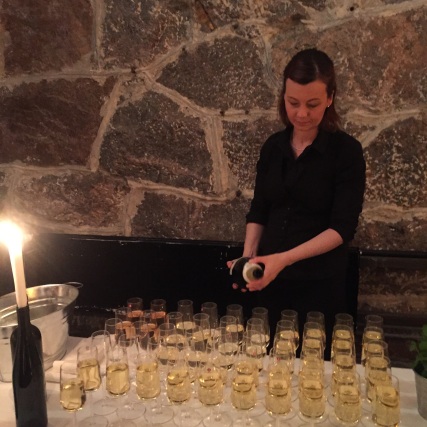 The aperitif being served from magnums 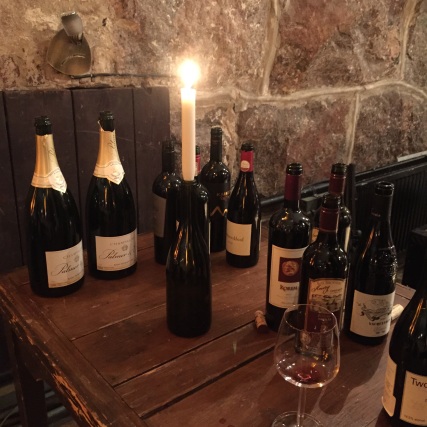 The wine-game table of prizes

Our pick of the day Kay Brothers Hillside Shiraz 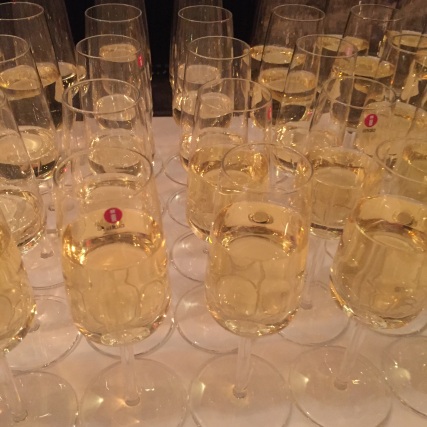 Proper glasses for the aperitif

A cozy atmosphere, wonderful wines and great friends: a memorable day indeed. We are already married, but if we ever arrange a big event, this is what I want our day to look like. And even before that, I am snatching the idea of the place-card holders.

This blog is usually mainly about wine, coffee, food and other things related to flavors. Today however the topic will be more of culture and art but it will still be partially connected to wine. A family owned company that I have been fond of for a long time is City Prints Map Art. They started out making beautiful maps of cities printed in nice colors, perfect to put on the wall.

They have since added a lot of other themes than just cities so they have college campuses, football stadiums, US States, soccer fields and many other prints. What makes these look very nice is in my view the minimalist style with a modern touch to it and smart use of colors. You may then rightly ask yourself why this is of interest here in a blog mainly about wine. The answer is that they are now making maps of wine regions that can be ordered as prints.

So far they have a nice selection especially for the US where there are maps for California, Napa County, Sonoma County and Washington. For the rest of the world there are maps for the following countries: Argentina, France, Germany, Greece, Italy, New Zealand, Portugal, South Africa and Spain. I think the prints look really nice and I may consider getting some. I also think there is potential to add more region focused maps within European countries as well but as it is a US based company it makes sense to have more detail in the US.

So in my view well worth checking out. I am not only a fan of the prints but also love to see when people start up their own business and succeed and I will happily continue to support them by also buying from them in the future.

A 33-year old entrepreneur and wine-lover. Lives in Stockholm, Sweden.